Early in 2012 I reviewed Nozbe and Zendone, two browser–based task management apps that are steeped in David Allen’s Getting Things Done® (GTD®) methodology. Since that time, both apps have continued to improve. Nozbe has added new functionality and overhauled the user interface of its suite of apps. Just today they rolled out version 1.8. Zendone, which was still in beta at the time of my first review, has gone gold, produced apps for the iPhone and Android and added significant new functionality and polish to what was already an excellent tool.

Nozbe and Zendone are very similar. They are both developed by software developers with a clear commitment to GTD® and to ongoing quality improvement. They lead the field in terms of integration with Evernote. For what it is worth, I have tested 28 task management apps over the past two years and Nozbe and Zendone both figure in my virtual ‘top–five’. This is a gentle review therefore, a comparison of two very capable tools.

In order to keep this post reasonably short I will not explain the mechanics of setting up folders and entering data in Nozbe and Zendone. More information about those aspects can be found in my original posts:

zendone: ‘a beautiful productivity tool for getting things done’

Let us start by describing what Nozbe and Zendone both do well:

What Nozbe does particularly well:

What Zendone does particularly well:

Let us have a quick look at what Evernote integration looks like in these two apps: 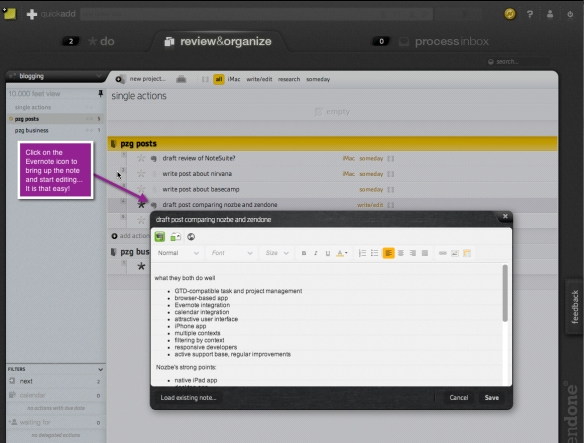 Nozbe version 1.8 lets you create a task from a note displayed in the ‘attachments’ view.

The presence of a clearly visible note attached to a task can spur you into action. I often jot down some points to address in an email and before I know it I have drafted the entire reply. This has happened in both Nozbe and Zendone. Any feature that reduces the threshold between a task and its completion needs to be cherished.

While either Zendone or Nozbe will provide you with a feature–rich, viable solution, bear in mind that there are areas where other apps may deliver more features or superior functionality. Some examples from apps reviewed elsewhere on this blog:

Whether any of the above features is sufficient reason to explore one of those apps further will depend upon your needs and preferences.

Either Nozbe or Zendone will provide you with a solid task and project management app based on GTD® methodology. If you are thinking of a team–wide solution, Nozbe is probably the better choice because of its team collaboration functionality, its rich array of features and its capacity to upload files and link to Dropbox. Zendone, however, also appeals because of its elegance and simplicity, its superior integration with Evernote and its better value for money. Even so, while I really enjoy using Zendone, I have never embraced it as my personal task manager because of the lack of subtasks and a native iPad app. If you are a mac user looking for the ultimate productivity solution I would, at this stage, still recommend Omnifocus because of its unparalleled functionality and its excellent mobile apps.

So, Nozbe or Zendone? Do you have a preference? Tell us about it in a comment…

Thank you for taking the time to read this post.

13 thoughts on “nozbe and zendone revisited”